Jin is coming back 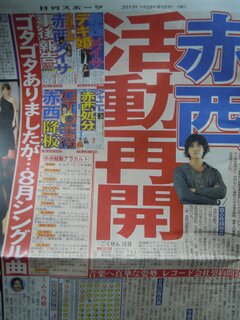 Reported in Nikkan Sports today, Akanishi Jin (28) will restart activity in August this year, with the release of a new single penned by him. It will be 1 year and 5 months since his previous release, Japonicana.

According to the news article, there were a variety of reasons contributing to his comeback, such as sincerely continuing to make music during all this time, and his commitment was recognised by those around him. However, owing to some problems with the contract with the record company, the release date of the completed song that is a summery uptempo tune was pushed back.

It seems that his improvement in attitude towards life is also a reason. In the past there were many reports of him partying and drinking, but along with the awareness that he was being disciplined (by the agency) and perhaps being conscious that he is now a father of a baby girl, these reports have become less.

But, besides the release of the single in August, his schedule is currently a blank slate. Even though his movie 47Ronin will be released in December, there's not been any specific PR activities decided.

With this comeback, the fans' reactions and Akanishi's attitude will be a litmus test of his career's future.