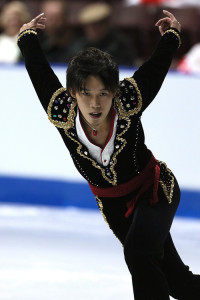 As we approach the 2014 Winter Olympics in Sochi, the Japanese men are looking excellent in training. It's going to be an intense battle for the top three spots at Nationals for a bid to the Games. Amoung those outstanding men is Mura Takahito, who was caught by a Japanese news crew earlier this summer practicing a Quad/Quad combination jump. If Mura is able to land this in competition it will be the first of its kind and is sure to get him a whole mess of points. As Mura is just one part of whats looking like a deep bench of talent (including 2010 Bronze Medalist Takahashi Daisuke, and upcoming young star Hanyu Yuzuru), could this be the year Japan will take home their first Men's Singles Olympic Silver or a even Gold?


Personally I want Daisuke to win but all the Japanese men are looking hot, could be they're gonna be hard to beat!
Just fyi, the above isn't a direct translation of the blog entry or news report but my summary from the skating community chatter about it, sorry if that breaks any rules.