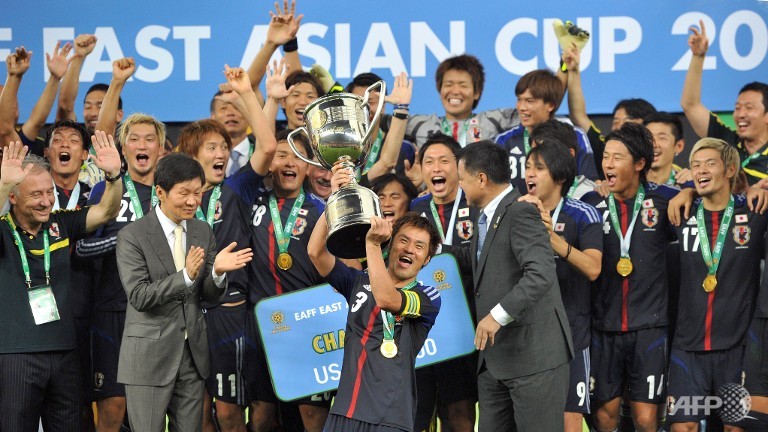 For the first time in its footballing history, Japan has lifted the East Asian Cup on Sunday after it beat South Korea 2-1 at the Jamsil Olympic Stadium in Seoul. Yoichiro Kakitani scored both goals for the Samurai Blue that saw them with seven points on top of the four team table, with China just two points below in second place.

South Korea had not scored a goal in their two previous matches against China and Australia, but they seemed like the better team versus their erstwhile neighbor and rival in the game’s first 20 minutes. But in the 24th minute, Kakatani broke away courtesy of a looping pass from Toshihiro Aoyama and faced South Korean goalkeeper Jung Sung-Ryong one on one. He chose to roll it into the net to get the goal for Japan.

But after eight minutes, South Korea got a goal back courtesy of Yun Il-Lok, who struck the ball into the top right corner of the net, where Japanese keeper Shusaku Nishikawa wasn’t able to reach it. The game appeared headed for a draw until Kakitani scored a goal deep into injury time to give Japan the game and seal their tournament victory.

Japan coach Alberto Zaccheroni said that this was a “very important win” for his team, who was composed of teams from domestic league J-League. Japan has just been the runner-up three times in this tournament while South Korea and China have won the cup three times each.