Lightning Returns: Final Fantasy XIII will be released in Japan on November 21. It will arrive in the United States on February 11, 2014, and then in Europe on February 14, 2014.

Square Enix also unveiled a “Final Fantasy XIII – Lightning Ultimate Box” premium set in June. The set comes with all three games in the Final Fantasy XIII series, a soundtrack album with selected tracks from the trilogy, a pamphlet with original costume designs, and a Play Arts figure of heroine Lightning as she appears in the new game. The box will retail for 26,000 yen (about US$260), and will be sold in limited quantities from Square Enix's online store. Normal copies of the game will cost 7,770 yen (about US$78). Players who pre-order the game in North America and Europe will be able to unlock Cloud's uniform, band, and buster sword as equipment for Lightning. 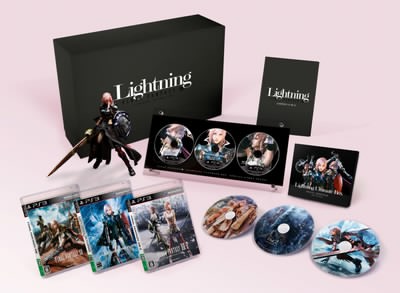