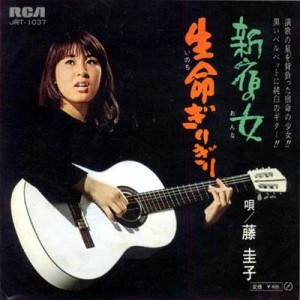 At around 7:00 a.m., the body of Keiko Fuji, whose real name is Junko Utada, was found on the street below a 60-story building in Nishi Shinjuku. Fuji, who is believed to have leaped from the building, was confirmed dead at a nearby hospital. She was 62.

Fuji was said to have visited the apartment of a male friend in his 30s which was on the 13th floor and one of her slippers was found on the balcony. The police believed that Fuji could have committed suicide but no suicide note had been found so far. Fuji was found lying on the floor by passers-by who called the police and her ex-husband. The male friend was said to be sleeping when the police called on him and he had not realized that Fuji was missing from his apartment until then.

Fuji was an accomplished actress and enka singer. Her debut album “Woman in Shinjuku,” which was released in 1970, spent 20 straight weeks at the top of Oricon chart.

Her only daughter, Hikaru, 30, rose to fame in pop music in the late 1990s after the debut of her “First Love,” which spawned the hits “Automatic/Time Will Tell” and “Movin’ on Without You.”

In 2006, the elder Utada had $400,000 confiscated from her luggage at JFK Airport in New York by drug enforcement officials just prior to boarding a plane for Las Vegas. She was not charged.