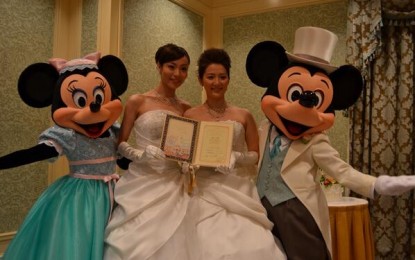 Despite a number of LGBT (Lesbian, Gay, Bisexual, Transexual) groups campaigning for gay rights around the world, even in conservative Asia, it is unlikely that same sex marriage will be allowed in Japan anytime soon, at least one with legal bearing. In Thailand, the Parliament has drafted a bill that would allow gay couples who are at least 20 years of age to be bound through civil partnership. However, as long as the Constitution of Japan prevails, same sex partnership shall remain legally unrecognized in the Land of the Rising Sun.

According to the Article 24 of the Japanese Constitution, unrevised since 1947, it is mandated that “marriage shall be based on the mutual consent of both sexes.” It is also unlikely to be amended as the ruling block is the right-wing Liberal Democratic Party. Albeit its name, the Shinzo Abe led political party strongly upholds Japanese culture and values, one of which offers no support for same sex marriage. A poll was made by Rainbow Pride Ehime, an LGBT activist group, prior to the December general elections inquiring about the running parties’ stand on same-sex marriage. The LDP firmly responded, “Marriage should be between different sexes. Thus there is no need to adopt a legal marriage system” for gay couples.”

Even though there is neither legal recognition nor acknowledgment for same-sex marriage or civil union in the country, Japanese society has not profusely discriminated those who belong to the LGBT, whom they call the sexual minorities. A 420-year Buddhist temple in Kyoto for example and some hotels have even held same-sex marriage ceremonies although participating couples are aware that such ceremony holds no legal implication. In March of this year, Tokyo Disneyland even had its first lesbian wedding ceremony at the park. The good news is that, according to Patrick Linehan, the openly gay U.S. Consul General for Osaka, “there is no religion-based discrimination or hatred of sexual minorities in Japan.” But, he says there is a wide lack of knowledge and awareness about homosexuality and gay culture, which can be fixed by awareness campaigns and the gay community being openly out there.