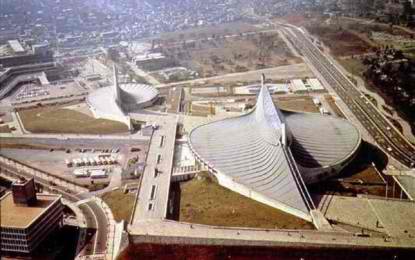 With Tokyo chosen to host the 2020 Olympics, the current National Olympic Stadium will be getting some serious remodeling in preparation for its second round with the Summer Games. Before the stadium becomes inaccessible to the public, people have been visiting to get a feel of the 1964 Olympics. The National Olympic Stadium hosts a number of visitors who embark on tours to see the historic arena.

A maximum of 20 people per tour are able to visit the National Olympic Stadium, where the opening ceremonies of the 1964 Olympics were held. During a tour the previous week, a group of women, families, and even people who lived at the time when Tokyo had its first Olympic hosting came to take a look at the stadium, despite the 31.5 degrees in the capital’s Shinjuku Ward. The first stop of the tour was the Prince Chichibu Memorial Sports Museum, where medals of the 1964 Japanese delegate are kept. Even the red blazers the athletes wore during the opening ceremonies, as well as other memorabilia from the first Olympics in Tokyo are on display.

The other stop of the tour was the cauldron that held the Olympic flame. One of those who joined the tour was 74-year old Yaoki Shuto from Nerima Ward in Tokyo. Shuto was not able to witness the 1964 Olympics in person, as the entrance fee was too expensive, but she has now seen the stadium up close and personal. “Finally, I can see the uniforms and the Olympic cauldron for myself,” she said. The last stop of the tour was at the VIP room, which the Imperial Family as well as notable Japanese and foreign figures used to watch the Games.

The stadium will have its big makeover beginning in July of next year. The new stadium, with its 80,000 seating capacity, will have a retractable roof and is expected to be completed by March 2019.