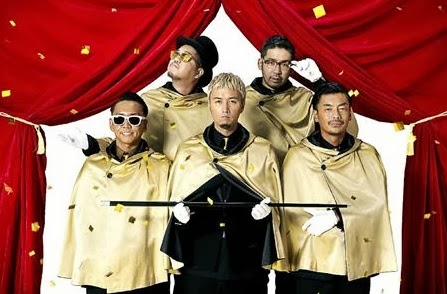 RIP SLYME will be singing the theme song for FujiTV autumn 2013 drama "Legal High" which begins its run from 9 October at 10pm on Wednesdays. The new song titled "SLY" which will be released on 13 November, was created specially for the drama whereby the melody was by DJ FUMIYA while the rest of the members wrote the lyrics. As to why the song title is "SLY", the group explained that the lead character in the drama i.e. Komikado Kensuke is a sly and clever man so they decided to use his image to describe the tactics men and women use in love. RIP SLYME commented that they are honoured to have their song being used for Sakai Masato's drama since the latter is now known as the high ratings actor following the success of "Hanzawa Naoki". In addition, one of the members SU is scheduled to make an appearance in the drama.