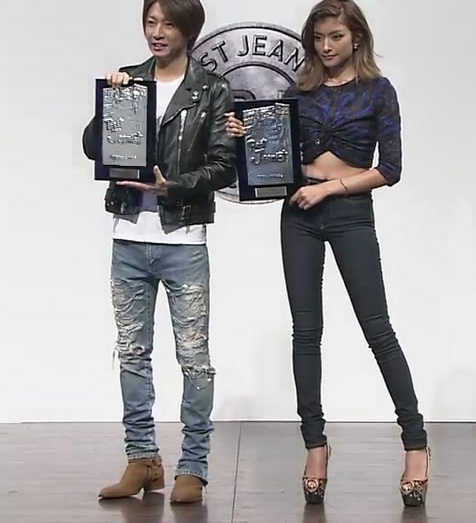 The awarding ceremony of the 30th Annual Best Jeanist Awards for 2013 was held in Tokyo, as Arashi's Masaki Aiba and model Rola emerged as the winners based on a nationwide vote for the country's best looking jeans-wearers.

Aiba, who sported a leather jacket over a white shirt and ripped jeans, won for the 3rd straight year in a row, joining SMAP's Takuya Kimura and Tsuyoshi Kusanagi among others in the Jeanists Hall of Fame. Aiba comments: "I'm delighted to receive this award which a lot of extremely popular figures have won in the past on its 30th occasion, and in my 30th year alive. I'll be treating the number 30 as my lucky number from now on".

Rola who appeared in a black & blue crop top with high-waist jeans comments: "I am really happy to win this award. Jeans look fashionable whether you wear them in spring, summer, fall, or winter, so I will still be wearing them a lot from now".