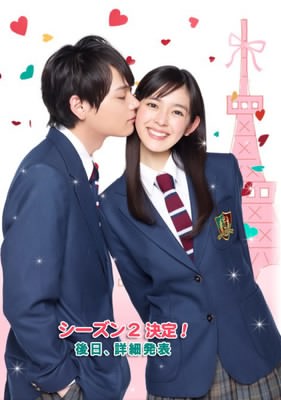 The official website for the new live-action Itazura Na Kiss ~Love in Tokyo (Mischievous Kiss: Love in Tokyo) television series announced on Thursday that the second season has been green-lit. More details will be announced at a later date.

In the romantic comedy, a high school girl named Kotoko finally tells a fellow senior named Naoki that she has loved him from afar since she saw him on their first day of high school. However, Naoki, a haughty "super-ikemen" (handsome male) with smarts and sports talent, rejects her offhand. Fate intervenes when a mild earthquake ruins Kotoko's family house. While the house gets rebuilt, Kotoko and her dad stay at the home of her dad's childhood friend...whose son is Naoki.

DramaFever and Hulu simulcast the series in English as it aired in Japan.

Digital Manga Inc. is publishing the manga in North America, and the company will release the 10th volume in November. The manga was previously adapted into a television drama series in Japan in 1996, two drama series in Taiwan under the name It Started with a Kiss in 2005 and 2007, a 2008 stage play, a 2008 television anime series, and a drama series in South Korea in 2010.