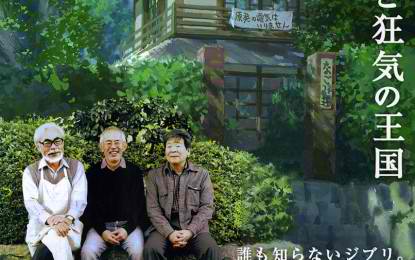 Studio Ghibli
fans will have to wait one more month until they can finally watch The Kingdom of Dreams and Madness, a documentary about the famed animation studio. It is set to hit the movie theaters by November 16, just a few months after its founder, iconic director Hayao Miyazaki announced his retirement from feature filmmaking.

The documentary is directed by Mami Subada, the filmmaker who also directed Ending Note: Death of a Japanese Salesman, which was about her father’s last days after he was diagnosed with cancer. This new documentary focuses on the three filmmakers who are the heart and soul of Studio Ghibli: Miyazaki, fellow director Isao Takahata and producer Toshio Suzuki, all with an average age of 71. It also explores the secrets behind the studio that has spawned hit after hit and has also won countless awards, including a few Oscars. This is a particular landmark year for the studio as they are releasing not just one but two major films: Miyazaki’s Kaze Tachinu (“The Wind Rises”), which premiered July 20 and is already a critical and box-office, albeit controversial, hit; and Takahata’s first film in 14 years, Kaguyahime no Monogatari (“The Tale of Princess Kaguya”), that will come out on November 23.

In September this year, the legendary Miyazaki announced that Kaze Tachinu would be his last feature film as he has decided to retire from full-length filmmaking. He said he still wants to be involved with Studio Ghibli for another ten years, but also acknowledged that he is now free to do whatever he wants. He also emphasized that the young animators will now “decide the future” for the legendary studio.