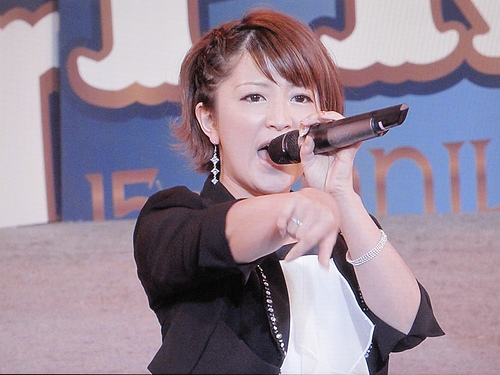 The agency of former Morning Musume idol group member Mari Yaguchi announced via fax on Sunday that she is formally retiring from the entertainment business. The 30-year-old has been dealing with the aftermath of press reports of her infidelity and her subsequent May 30 divorce from actor Masaya Nakamura.

Yaguchi had already been absent from her last regular television program, Jobtune, due to "poor health" and other cited reasons. The program formally replaced her at the end of September. She appeared on five regular programs before this year's scandal, but now has none left.

During her time in Morning Musume and its sub-unit Mini Moni, Yaguchi voiced a super-deformed "Yaguchi-san" version of herself in Mini Moni the TV and Mini Moni Yaru no da Pyon! She also made cameos as the hamster version of herself, "Gucchan," in Tottoko Hamutarō: Ham Ham Ham - Jya! Maboroshi no Princess and Tottoko Hamutaro Hamuhamuland Daiboken. She guest-starred as herself in Futari wa Precure Max Heart 2: Yukizora no Tomodachi and as Yoko on One Piece. Among other songs, she sang theme songs for the Hamtaro films and television series, One Piece, and Orphen.

Yaguchi designed a character called Panbachimon for the television anime Digimon Xros Wars, and she also recorded the voice for the character.