Keanu Reeves: Live-Action Cowboy Bebop Not Likely to Happen With Me in It 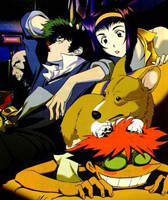 Actor Keanu Reeves (The Matrix Trilogy, Animatrix, A Scanner Darkly) hosted a Q&A session on the Reddit website on Sunday, and when asked about the live-action Cowboy Bebop film, Reeves replied:

Cowboy Bebop does not look like it is going to happen with me in it. The script that was written was great and amazing, but it would cost like half a billion dollars to make it, and while I wished and hoped I would have done that project, we are working on trying to get Bill & Ted 3. There's a script and we are trying to put it together.

In an interview with the Collider film news site in September 2010, Reeves had given a similar statement:

I haven't heard anything back. They turned in the script and it was very expensive. I don't know if they're going to…it would cost, like, half a billion dollars to make that script. So, I don't know where it's at right now.

The American film studio Twentieth Century Fox, the production company 3 Arts Entertainment, and the original anime studio Sunrise announced in January 2009 that they would be co-producing the proposed adaptation of the 1998 anime series. The original series follows the motley crew of the spaceship Bebop as it travels throughout the solar system in search of the next job.

Reeves was originally slated to star in the film. Joshua Long had acted as a production supervisor, and Erwin Stoff, a film producer who worked closely with Reeves on The Matrix and A Scanner Darkly, was also attached. The associate producers for the film were Sunrise President Kenji Uchida, the original Cowboy Bebop director Shinichiro Watanabe, and the original series script supervisor Keiko Nobumoto. The Sunrise studio itself and Masahiko Minami (former Sunrise producer and BONES studio co-founder) were both acting as production consultants. Peter Craig was writing the film's screenplay. Stoff had said in 2009 that the film would not be an origin story.