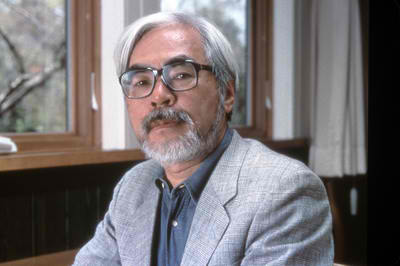 The weekly women's magazine Josei Jishin reported in its latest issue on Tuesday that Hayao Miyazaki is visiting a hospital in Tokyo for a heart condition.

The magazine features a photograph of Miyazaki visiting a cardiovascular specialty hospital on October 17. Josei Jishin also notes that according to a female source from the hospital, Miyazaki received a medical examination from the same hospital in mid-September.

During his retirement conference on September 6, when asked about his decreased weight, Miyazaki answered that it was because he had gotten fatter after he got married, and had actually just gotten down to the proper weight.

Josei Jishin reported in its article that according to "someone who knows Miyazaki well," Miyazaki "did not state it during the press conference, but the truth is he has a heart condition. He has been complaining of discomfort in his chest for two years. I heard that occasionally during walks or other activity, his chest would tighten and he would grab his chest as though he were in pain, and then would crouch down. According to the doctor's diagnosis, the doctor had a strong suspicion that he has angina pectoris."

Sankei Sports asked Studio Ghibli for a comment about the report, and the company responded, "Because this is a private matter, we will absolutely not give a response."