We can (not) believe it. Did this theater just leak the release date for the final Evangelion movie? 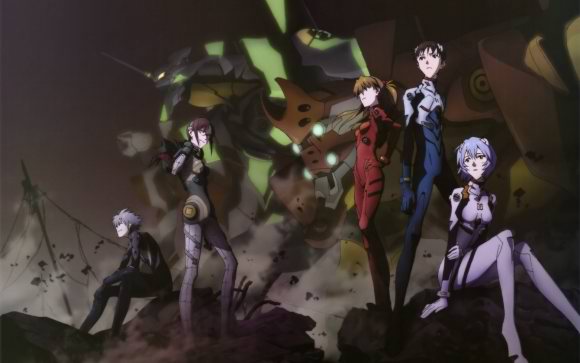 So, got any plans for December 31? Going to the temple at midnight to ring in the new year? Got a hot date for the annual gathering at Tokyo Tower?

If the website of one theater operator is to be believed, you could pass on both of those, and instead watch the final theatrical installment of hit anime Evangelion.

Recently, we were browsing the website of popular entertainment facility operator MOVIX. Among MOVIX’s many holdings is a chain of theaters, and the movie listings for one of their cineplexes caught our eye.

The theatre in question is located in Saitama Prefecture, Tokyo’s neighbor to the north. In the section on upcoming films on the movie house’s website, there’s an unobtrusive line showing one opening on December 31 of this year. The title? 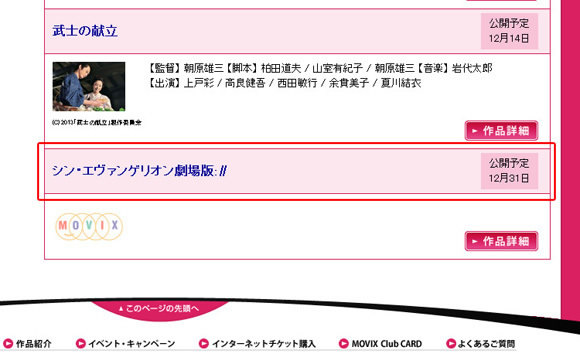 Are you kidding us?! The most highly anticipated anime film in decades, and the announcement is just a simple line of text with no fanfare at all?

Our initial reaction was one of skepticism. Evangelion’s producers have yet to make any sort of official statement about when the fourth and final Eva film will be coming out. The third film in the series was just released in November of 2012, and if the time between the third and fourth installments follows the pace the chapters so far have hit theater screens at, it’s unlikely we’ll get to feast our eyes on the anticipated fourth film until late 2014, if not 2015.

Furthermore, Evangelion director and creator Hideaki Anno just got done voicing the main character of anime legend Hayao Miyazaki’s swansong The Wind Rises. Would he really have had the time to put the finishing touches on what is supposed to be the very last incarnation of his magnum opus?

But then we thought about all the tiny little ways this might, just barely, be possible,

First, there’s the title. New Evangelion Movie ://. For a series as steeped in cryptic symbolism as Eva, a subtitle consisting of a colon and a pair of slashes would be par for the course.

Second, the theatre listing the movie is MOVIX Misato, located in Misato, a town in Saitama Prefecture that shares a name with recurring Evangelion character Misato Katsuragi.

And as for not having the necessary time to finish the script or animation? Let’s not forget the finale of the Evangelion TV series in 1996. Anno, facing artistic and budgetary constraints, decided to go with one of the most controversial anime endings ever, capping the 26-episode series with a finale filled with still photography, uncolored pencil tests, and sparse voice-over.

Even armed with the influx of cash that came after Evangelion found greater commercial success, the ironically titled 1997 film The End of Evangelion closed with a sequence best described as “everyone turns into Tang.” Lengthy, time-consuming reworkings of the narrative to make it more accessible are not on the list of things an Eva film needs to go through during production.

Is this rumor of a 2013 release date for Evangelion’s final movie too good to be true? Probably, but we’re keeping our schedules for New Year’s Eve open, just in case.