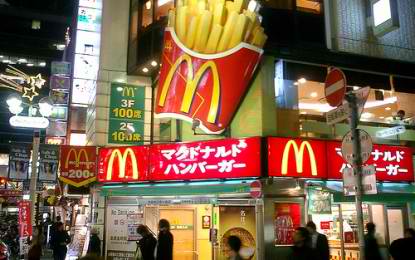 A McDonald’s outlet in Tokyo has finally removed a sign in the store that says homeless people are “unsuitable” customers more than a year after they posted it. The store had received a lot of complaints, calling the signage discriminatory and offensive.

The popular fast food chain’s Keio-Hachioji branch in the Shibuya Ward in Tokyo took down the sign on October 27 after being inundated with complaints from other customers and those who saw it posted on the Internet. The sign read, “We reserve the right to refuse customers unsuitable for our store, including unhygienic and homeless people.” One of the employees posted it in the 24-hour store because some customers complained that late at night, there are a few people who come in with “strong body odor.” The manager claimed that they did not notice that the sign had the word “homeless” until someone pointed it out to them and people started posting about it online. In Japan, the local word for “homeless” is sometimes considered an offensive word.

A public relations official for McDonald’s Japan apologized for those who were offended with the word that they used. The official statement says that the sign was put up there so that all customers can spend a “pleasant time” at their fast-food. They also advised the outlet to re-word their signage. It now reads, “When we judge that your behavior is offensive to other customers, such as making noise, sleeping or being unhygienic, we may refuse to serve you.”

lady_mercury 3rd-Nov-2013 04:36 pm (UTC)
IDK why people are bitching about this. In Atlanta, I've seen fast food joints that refuse people to squat unless they actually pay for something other than a drink.

Personally, I come to a restaurant to eat. Not to be assaulted with the smell of somebody's urine soaked pants.

impatiences 3rd-Nov-2013 04:59 pm (UTC)
I'm not trying to be snarky, but I've worked as a case manager for homeless people and it's some of the saddest shit you can imagine. If you ever work with homeless folks, you'll understand why that sign is grotesque and offensive.

lady_mercury 4th-Nov-2013 02:13 am (UTC)
Its unfortunately sad, yes, but I as a paying patron of an establishment do not want to be subjected to that type of atmosphere. I was to eat in peace, not having to hold back my gag reflexes or having to leave the establishment because I can't handle the smell.

Hell, it doesn't even extend to homeless. It extends to people will foul hygiene. That smell actually makes me want to throw up. Why should people like me be punished for wanting to eat at a location free of that smell?

Its depressing to know that homeless people exist in today's world, even more so when you learn their stories... But, I do not want to be subjected to their squatting at eating establishments either. McDonalds is a business, not a charity case. They have customers they need to serve and if a certain crowd is keeping people from their business, then they have the right to do whatever they want.

impatiences 4th-Nov-2013 02:19 am (UTC)
So it's sad that they exist, so long as they're not in your vicinity? That's part of the whole issue with homelessness as a social problem.

I'm the first person to tell a bitch to bathe if there's some b.o. problem going on, but this isn't about thing; it's about classicism and the invisibility of homelessness.

Also, McDonald's is not the height of fine dining.

enorcsi 3rd-Nov-2013 07:15 pm (UTC)
I know a guy who spent one night at that McDonalds in Shibuya cause he didn't wanna book a hostel for a night. He played his gaijin card and was not bothered. Well, at least he didn't smell. I think...

crumplelush 3rd-Nov-2013 07:45 pm (UTC)
When I was homeless last year I spent a lot of time in shopping centres where it's warm and there are toilets. Homeless people do actually have feelings you know.

That's the thing that I miss most about my old job, the fact that I could ban the homeless from coming in.
Leave a comment
PreviousNext
This page was loaded Dec 7th 2022, 10:13 am GMT.