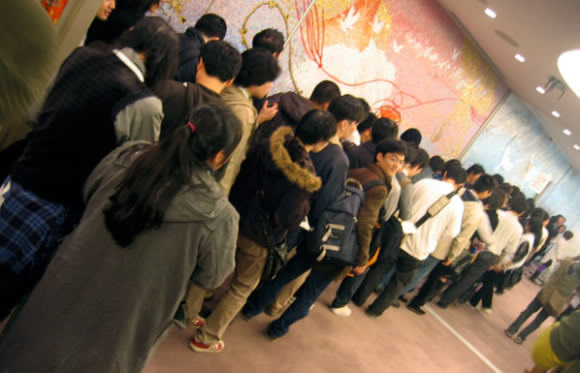 Japan’s idol industry is a unique beast of a moneymaker. The girls who succeed on this cut-throat career path are supported entirely by their fanbase. While they may sing and dance, their live shows have more to do with their idol image than their actual talents, and it is ultimately their popularity which determines their level of success. These girls are famous for their popularity, rather than popular as a result of their fame and talents.

Supporting this industry at its core are the idol otaku, men and women who are obsessed with the girls in idol groups. Functioning as a sub-set of otaku culture, which is already criticized by greater Japanese society, one might expect these idol fans to band together tightly, and share in harmony their mutual love for miniskirts. But, this has not been the case. In fact, a large rift has apparently formed between long-time supporters of the idol industry and newcomers to the scene. According to the old-timers, it would appear that these fresh, new fans don’t understand what it really means to be an idol otaku. Just look at what they had to say about these newbies infringing on their turf!

“People new to the scene don’t acknowledge the difference between the image that the idol created for herself and the actual girl. They rank the idols based on their delusions and push their ideas, hoping for validation of their status as what…a fan? Otaku?”

“Idols wouldn’t exist without the monetary support of their fans. The narrative for becoming a true otaku is filled with large purchases and many handshake events from even before the idols became popular. As new fans advance upon the idol scene, the attitude gap separating new and long-standing fans widens. It’s so sad that our stories are being trampled by all of these newcomers.”

“Is the fandom about me or the idol? Old fans will favor the idol and say that their own needs are secondary, while new fans just direct attention to themselves by saying that they like idols. And here’s another divide: when it comes to the idol world as a whole, older otaku understand the structure of the idol industry and what they can do to support it, while newbies don’t really give it much thought.”

So, people who are just now becoming fans of idols are characterized as willfully ignorant of the girls and all that it takes to support them, so that they can hold their place within the idol industry. But if these fans don’t really care about the success of their favorite idols, then what are they in it for?

“Newcomers want the idol’s affection. At handshake events, they’ll ask, ‘Do you remember my name?’  And if the idol says yes, they really believe that they were recognized. Older fans don’t need that personal recognition, just a little bit of acknowledgement, to know that, ‘Ah, the idol noticed me.’ These newbies don’t understand the context in which idols work.”

“Those people don’t really like idols. They like to like idols by going wild in a group and making themselves known with crazy dances and loud calls.”

Ah, so they’re attention grabbers, are they? I take it that’s a no-no…

“Lots of guys wear perfume. Real otaku stop at deodorant and sweat wipes. They’re overly assertive. They say that they like idols, but I’d like to call them out on liking themselves even more.”

“Lately I’ve seen ‘city boy’ types showing up at events. If you’ve got enough money to buy fashionable clothes, then you should be using it to support the idols!”

“Girls with lip gloss, fake eyelashes, and colored contacts are certainly considered fashionable. But the star of the show is the idol, and yet it seems like you’re trying to grab your own attention.”

But that’s all conjecture based on appearances. Maybe the new fans said something to anger their more-experienced idol-loving peers!

“I heard some female newbie say, ‘I like cute girls!’ In response I really wanted to make the assertion that, ‘I support the girls that I find adorable. How’s that for cute?’”

“I hear a lot of new fans say ‘What’s wrong with making love to an idol? Is there some law against it?’ Otaku will spend loads of money for a pseudo-romance with an idol, but only on the condition that the maiden remains pure!”

“I can’t handle it when people slander my favorite idol group with comments like ‘Momo Kuro is god! But Nogizaka is trash!’ You will never hear me say, ‘It’s great that the world of idols is expanding.’”

Frankly, the only real difference I see is in that elitist attitude! Can’t we all just get along and throw money at our miniskirt-sporting sweethearts in harmony?