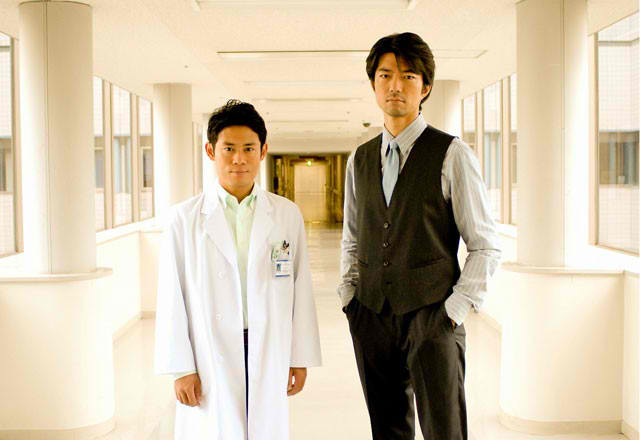 On Wednesday it was announced that the Team Batista medical drama and film franchise based on the novels of Takeru Kaido will conclude with a movie titled Team Batista FINAL - Kerberos no Shozo.

Atsushi Ito and Toru Nakamura have starred in several Fuji TV dramas based on the novels continuously since 2008, including “Team Batista no Eiko”, “Nightingale no Chinmoku”, “General Rouge no Gaisen”, and “Ariadone no Dangan”. While the previous two theatrically-released movies, 2008’s The Glorious Team Batista and 2009’s The Triumphant General Rouge, starred Yuko Takeuchi and Hiroshi Abe, the third will have Ito and Nakamura reprise their roles from the drama version.

Ito plays the soft-spoken physician Kohei Taguchi and Nakamura plays Keisuke Shiratori, an arrogant investigator from the Ministry of Health, Labor and Welfare.

In January 2014, a new drama will air titled “Team Batista 4 - Raden Meikyuu” and the film will be released in theaters after the completion of its run.

The story revolves around the opening of the International Ai (Autopsy Imaging) Center and the introduction of a new MRI machine called “Leviathan”. Taguchi and Shiratori become involved in major reforms to the death investigation system of the country and localities when a letter arrives threatening the destruction of Tojo University Hospital and Kerberos Tower in 3 months. Before the pair are able to uncover the truth, an unprecedented rash of suspicious deaths occur which can’t be explained through autopsy. On the day of the Ai Center’s opening, further incidents rock the medical community.

The film will feature original story elements including a parade scene with a military tank.

Show cast members returning for the movie include Tori Matsuzaka, Chiaki Kuriyama, and Hidetoshi Nishijima, among others. Actor Katsuhisa Namase will also appear.