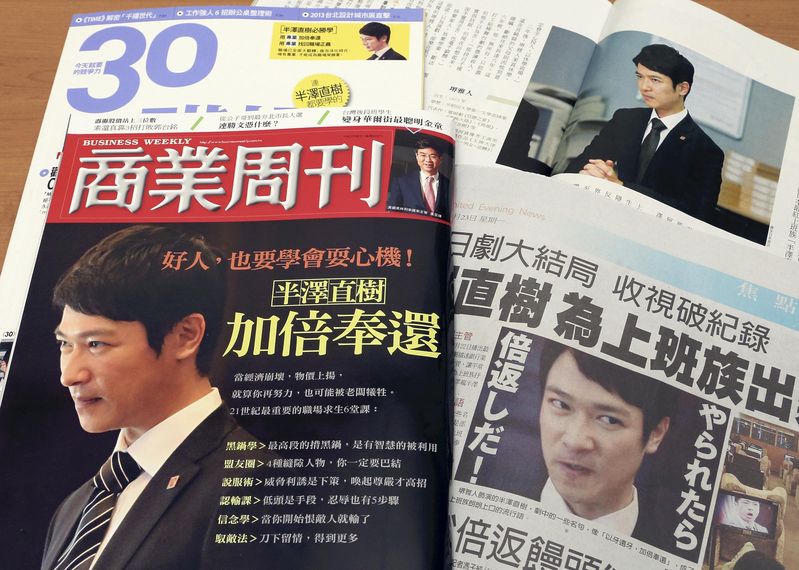 TAIPEI—“Hanzawa Naoki,” a popular TV Japanese serial drama broadcast from July to September, has become a major hit in China and Taiwan, with viewers sympathetically cheering the protagonist, a bank worker who overcomes many challenges under buck-passing superiors.

The drama, broadcast on the TBS network in Japan, is known for protagonist Naoki Hanzawa’s line: “Yararetara yarikaesu, baigaeshi da!” [It’s payback time. And that means you’d better be ready to pay twice the price!].

In Taiwan, the phrase is so popular that it is even used on such merchandise as bags.

The drama aired in Taiwan from Oct. 7 to 18 on a channel that broadcasts only Japanese-language programs. It obtained an average viewership of 1.49 percent, the highest rating for the drama division since the channel was started in 1996. It is also considered a successful rating for Taiwan TV, where more than 90 channels compete for viewers.

The drama has been well received among Taiwan netizens, who see echoes of the strife between their president and legislative head in the drama.

Recently, Taiwan President Ma Ying-jeou attempted to oust his rival Wang Jin-pyng, a heavyweight of the ruling Nationalist Party and president of the Legislative Yuan (parliament), claiming that he interfered with legal matters.

Dubbing Wang “Hanzawa Jin-pyng,” many netizens posted online messages calling on Wang to pay back what was done to him.

In China, the drama has not been broadcast yet, but it was illegally uploaded with Chinese subtitles on a free video site about a day after each installment was broadcast in Japan.

In Guangzhou, pirated DVDs containing all the installments of the drama were sold on the streets for 10 yuan (about ¥160) per set.

Taiwan magazine “Business Today” recently published an analysis of the drama’s popularity, which said in part, “It’s natural for superiors to shift responsibility to people working beneath them” in Chinese society.

An economics reporter who works for a Chinese paper said: “It’s impossible to produce such a drama in China due to censorship. I assume the drama has helped Chinese people vent their frustrations.”

I really enjoyed this show. Hope it will start broadcasting in Singapore so my friends can start watching too