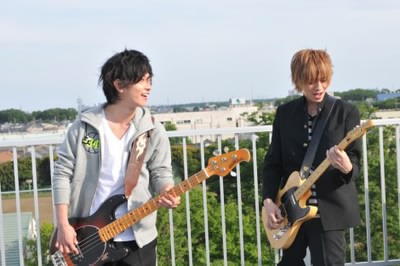 Japanese broadcasting system Fuji TV announced on Tuesday that it will begin broadcasting a Kanojo wa Uso o Ai Shisugiteru Side Story ~Boku to Kanojo ga Deau Mae no Monogatari~ (A Story of Before She and I Met) prologue live-action drama series to the live-action film adaptation of Kotomi Aoki's Kanojo wa Uso o Ai Shisugiteru manga. The ten episodes will air on Fuji TV for two weeks on weekdays on its late-night block from December 9, with each episode lasting 10 minutes. The full 15-minute versions of the episodes will be aired on the Fuji TV Two channel beginning on December 16.

The episode titles are as follows:

The story of the manga and upcoming film centers around Aki Ogasawara, a "sound creator" who composes for the popular band Crude Play and earns more than 100 million yen (about US$1.3 million) a year. Despite this, he conceals all of this and calls himself a NEET (Not in Education, Employment, or Training). Seeking a life outside of music, he begins seeing a high school girl named Riko Koeda. However, what Aki does not know is that Riko is actually a huge fan of Aki's music. Even with his girlfriend, Aki cannot escape the world of music.

The film will open on December 14.

Aoki launched the manga in Cheese! magazine in 2009, and Shogakukan is publishing the manga's thirteenth compiled book volume this month.