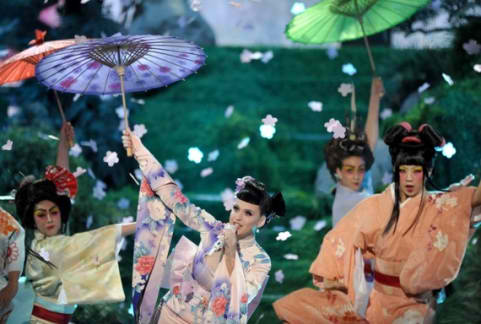 You would expect Lady Gaga to wear the most controversial outfits at any awards show. But at the American Music Awards, the costume that got everyone talking, and not in a positive way, was Katy Perry’s geisha-inspired outfit. But her stylist explains that it’s more about expressing their love for the Japanese culture than anything about gender and cultural stereotypes.

Most of the criticism comes from the gender angle, with the Western world’s view that the geisha culture is something that speaks of the servitude of women. But Perry’s stylist, Johnny Wujek, who is also the creative director of America’s Next Top Model, says that it was because both he and the singer love Japan. “Just walking around [in Japan], you feel something. We wanted to try and encompass that in the performance somehow, almost a tribute,” he says. In fact, it took them a lot of time and effort to prepare that costume and they even had a consultant from Kimono no Kobeya, a kimono store in Pasadena, California. The woman made sure that everything looked authentic, from the backup dancers’ original geisha dresses to Katy’s more modern take on the traditional outfit

But the critics cannot look beyond just the fashion sense of their choice. “…this was a full-barreled technicolor assault on a quarter-millennium-old set of traditions that would’ve given any self-respecting denizen of Kyoto’s Gion District a massive fatal heart attack,” said Jeff Yang of the Wall Street Journal. Katy does have her fans and one of them was the aforementioned Lady Gaga. The pop singer chose to see it as women empowerment, rather than going backwards to a time when the geishas were just living to serve and entertain. She also said people are generally too sensitive and should just let Katy be Katy, but added she wasn’t the person to ask about these sorts of things. 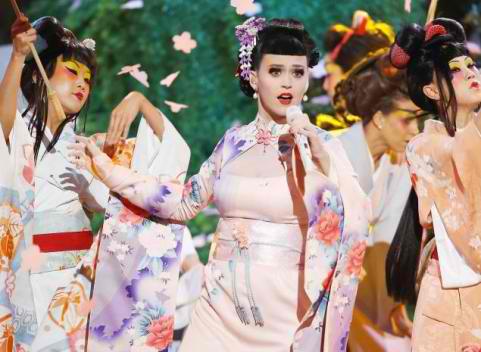 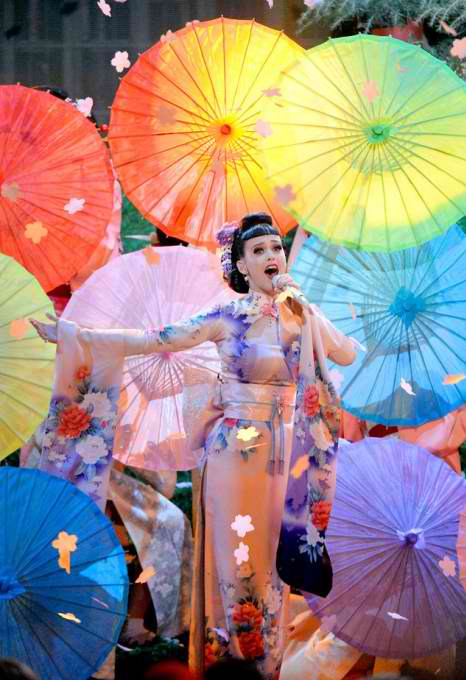 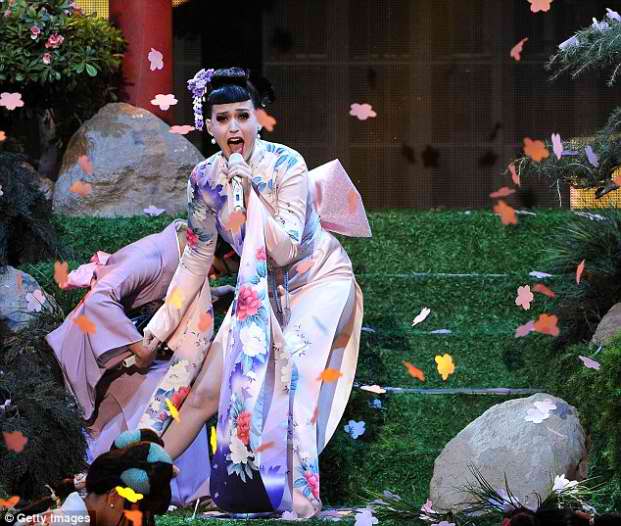 thomasvye 1st-Dec-2013 10:31 pm (UTC)
This caused some kind of outrage? Really? I guess it is pretty shocking to see a pop star with their clothes on...

impatiences 1st-Dec-2013 10:46 pm (UTC)
"Her performance was most certainly culturally appropriative — that much is obvious, but whether that appropriation rises to the level of racism depends on how you frame it.

If she had come out in blackface or wearing some sexed-up Pocahontas outfit and done the same type of performance using either African-American or Native-American cultural signifiers, then it’s an easy yes. As a rich, white American celebrity, that shit would have been racist.

It’s a little tougher to make the same call when it comes to Japanese culture, because there isn’t the same history of oppression that makes appropriation so inherently disrespectful. Then again, given America’s tumultuous relationship with the Japanese (let’s not forget those atomic bombs and internment camps), it’s not an impossible argument to make.

Again, it’s all in how you frame it. Is this an example of a Westerner cartoonishly lampooning an Eastern culture? Yep, it definitely looks that way. She didn’t have malice in her heart when she loaded up her performance with Japanese cultural signifiers, but that’s not really an excuse. She wasn’t intentionally trying to be disrespectful, but that doesn’t mean this isn’t a big fat stupid example of Ugly-Americanism writ large at the American Music Awards.

The problem with Katy Perry is that she should have known better. Normally when some American idiot gets obsessed with Japanese culture, she just annoys her high-school friends with a bunch of Hello Kitty nonsense until she grows out of it. Unfortunately, Katy Perry is a fucking superstar, so when she gets obsessed with kimonos and Geishas, dumb shit like this happens.

Whether it’s racist is for the Japanese to decide, and I honestly couldn’t tell you if they’ll embrace it, reject it, or even give a shit in the first place."

exdream1999 2nd-Dec-2013 12:10 am (UTC)
The very first Japanese article I read praised her performance and said that it authentically encompassed "wa", while the show ZIP! took credit for her performance because they were the ones who took her to meet geisha while on her visit to Japan. (This also caused a scandal, because she was wearing a yukata, which the geisha's manager(?) gave for to wear, because they told her to try and dance with them) Basically, Japan not only gives no fucks when things like this happen, but, in a way, encourage it. It's called Soft Power, and Japan actively exports it culture and uses it as a way to gain tourists.

BUT you can't ignore that Japanese-Americans found it offensive, since it was a performance on American TV.

What should happen is that artists should learn that these kind of performances would work in Japan, but not in the US.

But, we know that they're just going to ignore the complaints in the US and just look to how Japan liked it.
(no subject) -

Am I the only one who sees a bit of Vietnamese in there?

tilmon 2nd-Dec-2013 12:00 am (UTC)
That's what I see, too. In fact, when I first saw a picture of her from this performance, I was certain that the article had made a mistake referencing Japan instead of Vietnam.

icysnowdrop 1st-Dec-2013 10:51 pm (UTC)
It bothers me enough that Katy Perry exotifies Japanese culture to the extent of making that awful comment where she wants to skin Japanese people and wear their skin like Versace. I really couldn't listen to her music after that and I am 300% done with her after this event.

exdream1999 Re: Katy perry — 1st-Dec-2013 11:57 pm (UTC)
Considering that when she was in Japan, ZIP! took her to see Geisha in Tokyo where they gave her yukata to wear so she could practice dancing with them.

On top of that, she was singing about submissive love which is a stereotype that Asians have. Johnny Wujek can take several seats on that.

exdream1999 2nd-Dec-2013 12:34 am (UTC)
Lady Gaga did her make-up in Japan for her Japanese fans, and Japan has no problem with it. Like, this is how it should be done, kept to performances in Japan where it's well received.


Also, it was anime eye make-up.

lettace 2nd-Dec-2013 01:29 am (UTC)
it didn't make up for her poor vocals either lol what could of been an 'edgy' performance was a sad display of 'talent'

jali_susundeiru 2nd-Dec-2013 02:14 am (UTC)
Cue the overly politically correct anti-cultural appropriationalists frothing at the jaws and writing reams of outrage all over Tumblr.

ohprecioustime 2nd-Dec-2013 02:41 am (UTC)
she is honestly the dumbest popstar in music at the moment so I wasn't too shocked by this

But actually looking at the outfits? Really, those are supposed to be geisha-inspired? Perry's outfit especially is such a mess of slapped-together elements... It probably would have been better to leave it at "Japan-inspired" rather than putting a term that's as poorly understand in America as "geisha" on it.

k0dama 2nd-Dec-2013 04:58 am (UTC)
I would be far less angry at her if she had bought a really gorgeous furisode from Japan. I heard she visited there and tried on a kimono and all that, so it couldn't had been impossible.


But she still chose to wear this weird not-kimono outfit (was there even a single Japanese consultant on her design team?) on television for millions to see.

danicarolina 2nd-Dec-2013 07:33 am (UTC)
Not a Katy Perry fan, never have been, never will be. I'm not even a fan of the outfit because wtf even is that. But I do think she ought to be able to wear whatever she wants without receiving this kind of backlash for it. I've never understood why some people get so offended over other people's choice in attire, even when the attire has cultural significance. So long as you're honoring the culture and not poking fun at it, what's the problem?That being said, though, you'd think that someone would've warned her to expect negative press when wearing geisha-inspired clothing. If so many people are indignant just over regular people wearing geisha costumes on Halloween, you'd think a celebrity would definitely know to stay away from it :/ So while I think she should still be allowed to wear what she wants, I have no sympathy for her ignorance.