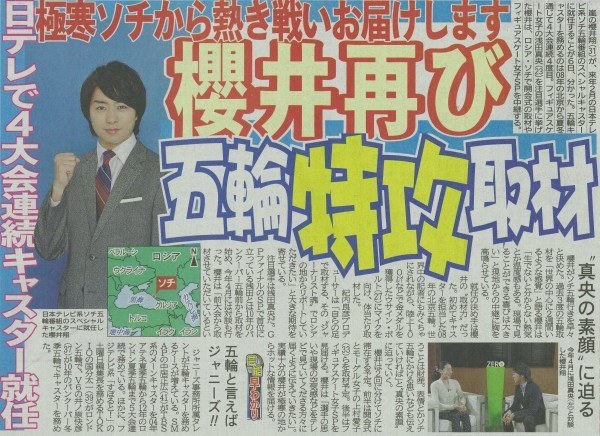 It was announced that NTV has appointed Arashi‘s Sakurai Sho as the network’s special Olympics caster for next year’s Winter Olympics in Sochi, Russia.
This will be the fourth time that Sakurai was appointed as special Olympics caster after Beijing Olympics (2008), Vancouver Winter Olympics (2010), and London Olympics (2012).
Sakurai’s coverage for the Winter Olympics will be divided into two portions.
First, Sakurai will cover the opening in Sochi on Feb 7th and the events on women’s mogul featuring Uemera Aiko (freestyle skier). For the second half, Sakurai will be covering the women’s figure skating.
“Whenever there is Olympics, I always wanted to go on site,” Sakurai commented about his 4th time to be appointed as the Olympics caster. “The atmosphere is different, the temperature is heighten, and you won’t understand [the feeling] unless you’re there.”
You can watch the video here on Facebook
Congratulations to Sho-kun!