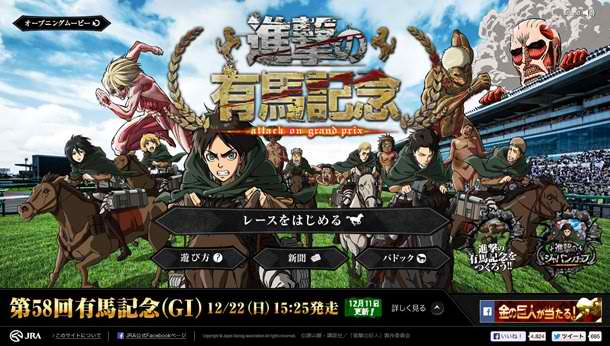 The Japan Racing Association (JRA) unveiled the second round of its collaboration with the Attack on Titan anime on Wednesday with the next leg of its online horse-racing game.

The "Attack on Grand Prix" event turns the members of the anti-Titan force and Titans into racers. In the game, the player can choose one of seven racers. The game then plays dubbed over footage from the anime series with opportunities to affect the outcome by playing point-and-click games. The scenario also changes based on which character is chosen.

lol colossal titan by the audience, he's too slow for this xD
my bet goes to the female titan :P
Leave a Comment

bleed_peroxide 12th-Dec-2013 03:02 pm (UTC)
Stuff like this makes me wonder how the mangaka feels about all this stuff being done.

I hope they have it where your character gets eaten or trampled in a horrible, bloody fashion if you lose. At least give the game some real consequences for losing and stay true to the series, y'know?