New Studio Ghibli movie revealed for 2014: When Marnie Was There 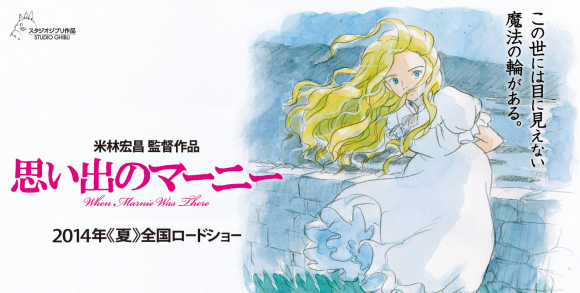 Seemingly not content with having two brand new movies out this year in the form of Kaze Tachinu and The Tale of Princess Kaguya, Japan’s Studio Ghibli has just announced that a new animated feature, Omoide no Maanii (When Marnie Was There), based on the novel of the same name by English writer Joan G. Robinson, will be hitting screens in Japan in summer 2014.

The news broke earlier this afternoon as Ghibli unveiled a new website, which offers a single still image of the movie’s poster. Distributor Toho has also confirmed the film in its 2014 lineup.

The original 1967 novel for kids and young adults tells the story of Anna, a young foster child who is sent away for the summer to the Norfolk countryside. She soon meets a girl called Marnie and, through their many conversations, begins to learn more about the girl’s intriguing past.

When Marnie Was There has been translated into multiple languages, and is loved by many Japanese, particularly young women who felt that it helped them, too, find their place in the world and cope with feeling that little bit different to everyone else.

The Studio Ghibli adaptation is being directed by Hiromasa Yonebayashi, who made his directing debut for the acclaimed studio with 2010′s The Secret World of Arrietty.