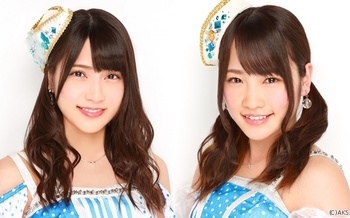 On 4th June KAT-TUN will release their new single "In fact". They already performed song on Shounen Premium but this is first thing we got to see of actual PV.

I LOVE the song but those outfits...

According to Oricon, AKB48's 36th single "Labrador Retriever" (went on sale on May 21) in which Watanabe Mayu serves as the center, sold 1,462,000 copies on the first day, and topped the daily single ranking.


The single broke the group's own record for the best first day sales which they previously set with "Sayonara Crawl" (released in May 2013, 1,451,000 copies sold on the first day).

This is also their 7th single to sell over a million copies on the first day.

"Labrador Retriever" contains the voting serial number card to the "6th Senbatsu General Election" which is to decide the Senbatsu members for their 37th single (currently untitled, to be released in August).

Well after of the massive graduation of gen 1 members this kid of sale is unpredictable but what is also unpredictable is the result of preliminary haha this is so fun to watch. No wonder they are still staying strong. Unlike other ... this fandom is still intense and interesting in terms of gimmicks and events. well haters gonna hate

Flowers‘s new single "Nettaigyo no Namida" (熱帯魚の涙; "Tears of a Tropical Fish") will be released on June 11. This is the 7th single from Flower. 3 versions are available.
It is the theme song for the variety show Sukkiri!! (スッキリ！！) airing on Nippon TV (日本テレビ).
( Collapse )

The song is gorgeous and so is the PV! *.* You can already preorder the single on "YesAsia" and "CDJapan" (I already did! ^.^).

Sandaime J Soul Brothers will be releasing 4 singles this year under the theme of FOUR SEASONS, and R.Y.U.S.E.I. is for summer. 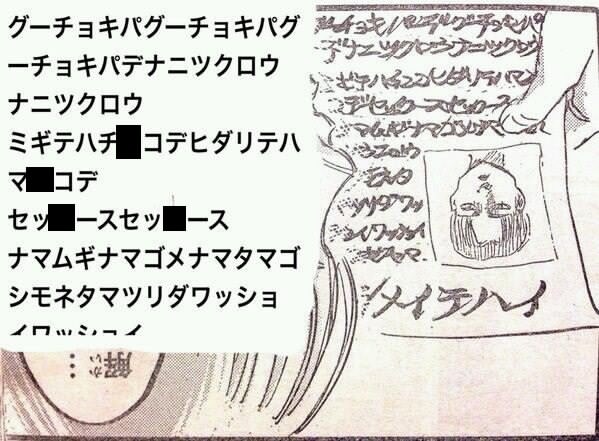 Fans of the Attack on Titan manga have discovered that while the in-world text appears to be gibberish, it's actually pretty easy to decipher. All you have to do is flip the page upside-down, and voilà, a message appears in sloppily-scrawled katakana.

What it reveals, though, isn't exactly illuminating. No, there aren't any hints about the origins of the titans or what's in the basement, but it does give you a strange glimpse inside the mind of mangaka Hajime Isayama.

The translation is a little unsafe for work, so highlight the paragraph below if you want to see it.

Maybe an eager fan will track down the rest of the letters in the series and see whether or not Isayama decided on barley or rice.

It was announced on May 13th, 2014 that the popular group KAT-TUN will go on a national tour for the first time as a 4 person group. They will begin the tour at Tokyo International Forum starting on July 8th and will conclude the countdown at Kyocera Dome Osaka for the second year in a row. In addition, members of KAT-TUN have commented on Jin Akanishi(赤西仁) (29), the original member of the group who has left Johnny's at the end of February this year for the first time.

The group held their first solo concert at Tokyo International Forum in 2002 after the formation of the group, but they will now perform as a group of 4 for the first time after 12 years. Kazuya Kamenashi(亀梨和也) (28) said, "The New KAT-TUN is going to have new approach on things. I look forward to what we will make of it". Tatsuya Ueda(上田竜也) (30) proudly commented, "It's going to be great."

Source: Universal Music Japan
Wow, I didn't think i would like this song, but I actually do.
Collapse